Ok, Passover is less than a week away and my shopping  is done and my food is all organized. I moved all the chametz to my stockpile closet in the hallway, and the kosher for Passover stuff in the small pantry in the kitchen.

Here is some of what I have to work with when making my meal plan:

In the freezer, I already had some things bought at sales over the past couple of months. Strawberries, some plain salmon fillets, and frozen plain broccoli and asparagus.

There were many cans in the pantry, including diced tomatoes, beets, mushrooms, potatoes, canned milk, yams, and various canned fruits. Matzos and macaroons were bought on special a couple of weeks ago. I’m a tea addict (like most southerners) so there is always a wide variety in my apartment.

Of course there’s a variety of spices and flavorings, including some homemade schmaltz. I know that some grocery stores carry it, but not any of the ones near me, and I thought it would be fun to try to make my own. So, yesterday I made my first batch of homemade schmaltz.  Well, it was supposed to be a batch. But I only had a couple of chickens worth of skin and fat, so it probably won’t be more than a few spoonfuls. But I did buy a lot of chicken for Passover, so I will have the skin from those soon and can make some more. Next time I make some, I will take some pics while making it and let ya’ll know how it comes out and how to make some yourself.

And now, on to the shopping!

Now on to my local Giant. I got there at the perfect time of morning. The butcher had just finished marking down some meat on manager’s clearance. I was so giddy, I could have danced. But I chose to be dignified, so I  bought:

I do love manager’s specials. I didn’t do the dancing until I got home. Ok, so maybe it was  in the car.

I hit the produce section for some 4.99 buy one, get one free deal on potatoes and onions. I also got some tomatoes and cabbage, but the best deal was grapes. If you had a flyer coupon (and you know I did), red grapes  were .98 a pound with a 5 pound limit. You better believe I pushed all 5 of those pounds quicker  than my last diet. They were immediately divided up into about 4 Ziplocs in the freezer and fridge. All in all, pretty good deals at Giant.

Finally, I stopped at the dollar store for some packages of dried fruits and cashews, pecans and almonds for cooking and snacking.

It looks like I have some stuff to work with. I might be buying a few small things over Passover, mostly perishables like fresh fruit and eggs, but I don’t anticipate spending a whole lot more. Passover pretty much blew my grocery budget for the month. (like I expected it too.)

By the way, during my Passover pantry tidying, a mysterious jar appeared. It’s of Red Cabbage with Apples. I don’t remember buying it. I don’t know if it is a gift from the heavens or if aliens are observing to see if I will eat it.  But it sounds kind of yummy, and it doesn’t have any non Passover ingredients, so in  the good pantry it goes. was thinking of just serving it over roast beef, but any other recipe suggestions? 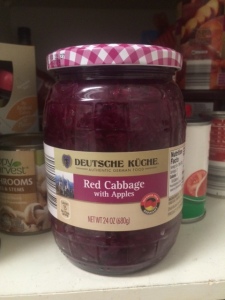