Another collection of my mailbox gifts is here!

I love to send out for freebies and samples. It’s like getting surprise gifts in my mailbox every day.

But I have reasons for sampling too. I have hypersensitivity and am very easily overpowered by strong scents and tastes. Even sitting next to someone wearing a lot of perfume can trigger an asthma attack. Due to this, I like to try out the samples before I waste my money on things it turns out I can’t use. Also, most samples come with high-value coupons to buy the full size in stores. Most of the coupons that came with the samples were for 3 dollars or more off.

Here are the things I have received the last 2 weeks. I added a little review of the stuff I got because you might be interested, but also because I was itching to write something other than a list.

A free 8 pack of Deer Park Sparkling Water. This is in coupon form, but I can pick it up at any supermarket.

I haven’t redeemed this yet, but it sounds good to throw in a lunch bag for work or school, so I’ll give it a try.

These didn’t have a bad flavor. They weren’t gummy bear good, but definitely not medicine-y at all.  I don’t know how well they work, immunity wise, but they probably wouldn’t hurt, especially during flu season. I don’t plan on buying them though.

Because of my hypersensitivity, I usually go toward the grooming things that are made for sensitive skin or are more natural, since chemicals (even those meant to smell nice) tend to have scents that can be too strong. Unfortunately, this was a little more scented than I would like, so I had to toss it.

I haven’t opened this yet, so can’t say anything about it.

Some packets of Truvia sweetener

I  prefer real sugar, but I will keep them for company coming over.

There were three packets so I opened one to test the scent. The scent is pretty mild, so I’ll toss them in my travel bag for my next trip. (Sample packets often come traveling with me, it’s easier than carrying around big bottles of shampoo and stuff)

Lightly scented and it worked. However, the coupon that came with it was already expired.

Not as unflavored as they claim, but I put it in water. The flavor would not be noticed if mixed in juice or something, especially with someone who’s not so sensitive to taste. I couldn’t tell any difference in my stress level, but that’s probably because after a sip my cat suddenly jumped on me to crawl up for snuggles. After cleaning the spill, I figured a purring cat on a lap was better for calming than any drink mix.

Turns out we have moderately hard water. Interesting to know, but I’ve lived here for 10 years, so I will probably just deal with it. It came with a coupon for softener pellets if I change my mind though.

A toilet paper holder extender for the mega size rolls from Charmin.

It fit on my TP holder. That’s it, what else can I say about this?

A small cookbook of a variety of recipes using Jiffy baking mix from Jiffy.

Not much of a review needed here. It has recipes in it, what else can I say?  Actually, there are some decent recipes in here, I’ll try out a couple soon.

A small deodorant from Native All Natural Deodorants

Since this was all natural, I thought I would give it a try, but unfortunately, the coconut scent was very strong when I took off the cap. I never used it so I might give it to a friend.

A razor from Schick Intuition Fab, this also came with a sample of Skintimate skin conditioner.

Haven’t used it yet, but I’ll add it to my bathroom cabinet.

A men’s razor, shave cream and aftershave from Bromley’s for men.

Note: Of all the samples I’ve gotten recently, I am most impressed by this one. Star hasn’t used it yet, but the company knows how to make samples to impress. The razor handle is sturdy and heavy, not cheap plastic, and the cream and aftershave came in amounts larger than average than a typical sample. This makes it easier to see if it really works, so we’ll see if he likes it.

There are plenty of freebie websites out there if you want to get your own “mailbox gifts”. Some of the ones I like are Freebie Shark, Hunt 4 Freebies, and Freefly’s, but there are so many out there. I’ve said it before and I’ll say it again. Keep a separate email just for couponing from one of the many free email engines. To get the samples, you often have to enter your email, so just use that one to keep your main email free of ads. You can also unsubscribe from any mailing list if you want, but this will keep them out of your regular email until then.

Well, with all the hubub of getting married, I admit to have let my blog fall by the wayside. But now, the stress is over, and soon I’ll be doing posts on how I used savings and all the DIY projects I did for the big day.

But I have missed posting and for my first post in a while, I offer you the following restaurant deals, good for veterans and active duty military members. Bring along your military ID and bon appetit!

California Pizza Kitchen- Free meal from a selected menu AND a buy one get one free card to use later.

Denny’s – on MONDAY, get a free grand slam from 5am to noon.

Golden Corral – On MONDAY, free dinner buffet between 5 and 9pm.

Texas De Brazil – 2 Veterans eat free PLUS all other members of your party get 20% off!

Some of these offers are only in participating locations, so you might want to check before heading over. And don’t forget your military ID, several places require it to get the discount. This list is by no means all the restaurants and stores offering discounts for our men and women in uniform. You may want to also search online for Veterans Day offers for more specific offers in your area.

Thanks for your service!

So, I was just doing some intense frugal living research on the internet. (Or I was just browsing Wish because I was bored) But I found some new really cool freebies and samples for you to try. Click on the links for some mailbox presents. Don’t forget to use your special couponing only email when signing up so your inbox doesn’t get flooded.

Free 10oz. sample of Enfagrow Toddler Next Step from Enfamil.

A new pain cream sample from Mind and Body Matrix

Sample of a new Mugler perfume

When I first saw it, I thought it said Muggle perfume and I got all happy at the idea of a Harry Potter makeup line, even if I can’t wear it due to allergies. I was disappointed.

Some incontinence products from Discreetly Dignified

Some incontinence products from Equate

A free packet of spinach seeds to plant from Tasty Bite

Free DVD from Together With Baby.

Free DVD from Together With Baby. Choose from either You and Your Baby or Caring for Your Late Preterm Infant.

Veteran’s Day is here, and I meant to have this up yesterday. Unfortunately, my asthma kicked in, and I spent the evening and night in the ER.   But here are some of the best completely free goodies for active duty service and veterans for today, November 11, 2017.  For most of them, you just have to show your military ID. Happy Veteran’s Day!

Bed, Bath and Beyond- 25% off entire purchase through Nov 12

Dollar General- 11% of both in stores and online

Firestone Complete Auto Care- 15% off automotive service through the 13th

Goodwill- 50% off all any apparel.

Home Depot- 10% discount for all veterans

Meineke- All veteran’s get a free basic oil change

Publix- 10% on all groceries

Rack Room Shoes- 10% off for military personnel and their dependents

Ok, here are some of the freebies and samples I found today. These are ones that are samples of new products that might have limited quantities. Freebies part of a long-term giveaway can be found under the freebies tab at the top of the page. Don’t forget to use your separate couponing email if the site asks for it. Or, you could just read all the sales emails, but who has that time? Enjoy your mailbox goodies!

I am allergic to perfume and don’t wear it, so I don’t know much about this perfume company. But hey, it’s free, so if you like smelling nice, here you go!

Hi all, I have had some major health problems lately, (which I will get into in a post soon) so I apologize for the long time between posts. I am currently thinking about how to re-design this site to make it more interesting and organized. I had many ideas on what and how often to post and I will be checking out how to do it. Not easy when you have absolutely NO web or design experience. I will be working on it over the next couple of weeks, so please stay tuned and in the meantime, check out my YouTube channel, Coupon Choice Mom. I seem to have been more active on it than here, probably because I love playing with editing equipment. (It’s probably why I went into TV broadcasting in the first place. ) I hope you will stay tuned. If you follow me on the main page, I will make a post announcing that I am back when I’m done, but please check out my older posts in the meantime and subscribe to my channel! 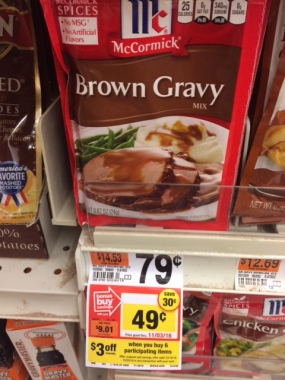 UPDATE: This sale is over, sorry!

There wasn’t enough deals to do a real couponing trip this week, but there was a deal  in my area I had to let people know about. (In case anyone in my area is reading this.)   Before I finish planning a couponing trip, I make a run through to check for deals that didn’t make it into the flyer for whatever reason or which varieties are included in “select varieties”. And this is why I do this. This was an UNADVERTISED deal at my local Giant stores in Fairfax County Virginia, and just in time for Thanksgiving planning.  You don’t even need a coupon for it. 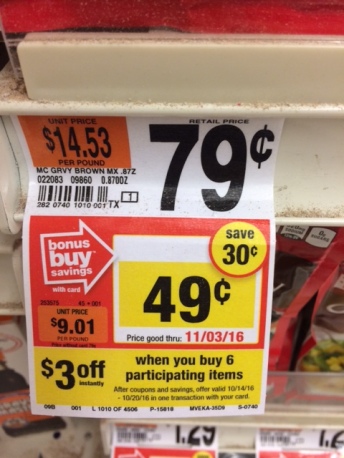 Select varieties of McCormick products have a special going that if you buy 6, you get $3.00 off. One of the varieties is plain old brown gravy packet, perfect for turkey, potatoes, and dressing you might be needing next month. And look at that, the gravy is on additional sale for .49! 6 of those is $2.94, which means you’re already making 6 cents off this deal. If you find a rebate or coupon, that’s even better savings. (Although Giant doesn’t allow coupons on things that are already free.) I went to three local  Giants and saw the same deal at all three. However, I noticed that the word did get out, because the last one had no packets left.  So there you are.   Free gravy, no coupon or minimum purchases needed. Just a great addition for anyone’s stockpile.

Follow me here to see even more savings adventures!