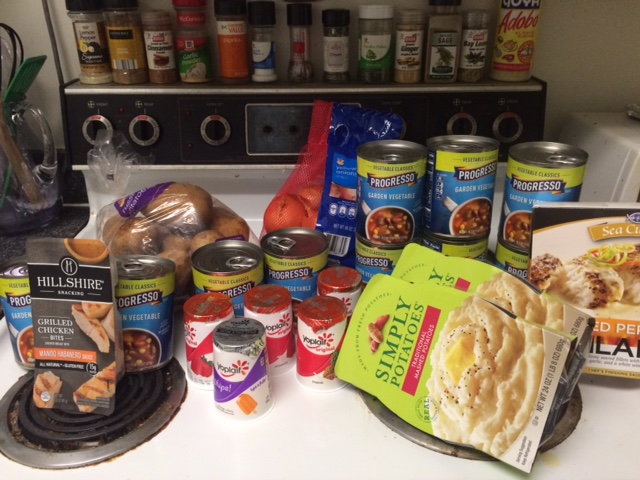 The main deal was soup. I love soup. A nice thick soup is great with some good  bread on a cool night. The Progresso soup was on sale for 1.00 each, but if you bought 10, it dropped to 88 cents each. I had coupons for 50 cents off 2 cans, but Giant doubles. So I needed 5 coupons, enough for 10 cans. Guess how many I had. Well, you’re wrong, I had 7. But that was more than enough. The bad news is that it looked like another couponer got there first and there weren’t that many flavors to choose from. But she (or he, who knows) left the garden vegetable alone, and that happens to be my favorite anyway, so I’m a happy woman.  Ok, so now I have 10 cans. I also had a load to card from the store for 2.00 if I bought 10 cans of soup. Done. So with sales and coupons, they came to 18 cents a can. Not bad for soup that is usually 2.49 a can.

On to the yogurt. I only had 1coupon, so I only could grab 5. On sale for 50 cents each and a coupon for 1.00 off 5 made them 30 cents each. And it looks like the other couponer hit here first too and took all my prized peach yogurts away. They did have a couple of strawberries left, and a lemon burst, so I’ll have those.

Those new Hillshire chicken bites snack packs were on sale for 1.49, and I had a dollar off 1, so I’ll give them a try.

Two packages of Simply Potatoes microwavable mashed potatoes were on sale for 2.50 each, and two 75 centers which double gave me both for a total of 2 bucks.

Well, you can’t have too many potatoes, and the microwavable ones will keep, so I grabbed a 5 pound bag of russets on sale for 1.88 and a 3 pound bag of onions for the same price. See how healthy I’m being? Carbs non-withstanding.

Finally we have this nice frozen cracked peppercorn tilapia fish down from the original price of 6.99 to 3.99. Add my dollar off coupon and its 2 meals of gourmet fish for 3 bucks.

And that’s pretty much it. Not a huge trip (except for the savings). I’m also amazed at how healthy everything I bought is. No chocolate in sight. I’m surprised myself.

These deals were from Giant stores in Fairfax County, Virginia. If you found another good deal where you are, share them in the comments. Happy Couponing!